Your Dying Spouse 154 - The Politics Of Death {FMF}

Time for Five Minute Friday, the weekly keyword-driven writing challenge hosted by Kate Motaung. Please visit; there are some great writers there!

I'm writing this ahead of time. It's been quite a week, not in a good way, so I am trying to make sure I have something. I'll amend this with some reference to the given word if I can. (The word is GROW, and I did add something to the end of this post.)

This is something that has been on my heart for awhile. I promised myself I'd never 'go political'; but it seems that there is a need to. I hope I won't lose any of you, dear readers...and I hope that at the very least you'll indulge me for a few minutes.

The upcoming presidential election is important to me, for two reasons.

The first is personal. The Affordable Care Act has changed the face of medicine in the US, and some of the potential it has is worrisome for someone in my position (well, not necessarily for me; I'm done for, but you know what I mean).

The law includes the provision for healthcare rationing by what have been colloquially - and accurately - labeled 'death panels'. These can be formed at the behest of the administration if the money coming in falls below a certain percentage of the money being spent on health care.

They will decide the fate of those who need expensive and life-saving treatment, based on an economic calculus. Yes, insurance companies have done something similar to maintain profitability, but insurers are accountable to their shareholders, and at least to some degree, their subscribers.

To whom would a government-appointed panel, selected by and composed of unelected bureaucrats. To whom would they be accountable? To accountants.

And so, there's the possibility that one day your mother or father or wife or husband might, instead of receiving lifesaving or at least life-extending care, might be counseled on...assisted suicide.

This would not be based on a national emergency, like a war...it would kick in when too much was going out, and not enough was coming into the health care system. Middle-aged men would still be getting Viagra, and gender-troubled people would get sex-change operations...but after a certain age, your loved one would not be deemed worthy of continued life.

Meanwhile, National Public Radio would still be funded, the National Science Foundation would still pay academics for studies on the sex life of shrimp, and the President would still get taxpayer-funded golfing vacations.

The second issue is related to the last point...not deemed worthy of life. Yes, it's abortion (which is a subject addressed in my latest novel, Emerald Isle).

The Christian view is quite clear. Life begins at conception, and abortion is therefore murder. Period, full stop.

But let's back out of that for a moment. Most supporters feel abortion is allowable until a fetus can'survive outside the womb. In other words, independent viability is the hallmark of a valued life.

There's a problem there. A lot of them, actually.

First, viability is a moving target, informed by the state of medical knowledge. A viable fetus today would not have been viable twenty years ago.

So does that mean that what might be considered a child today would not have been a child back then? Was today's life really just a collection of cells, back in the day?

Second, viability is a process, not an event, and 'personhood' is a development of which we know very little. The fetus can respond to stimuli far earlier than we once thought possible, and it's reasonable to assume that it can feel pain, as well. Abortion's a brutal procedure. Do we have the right to assume a lack of feeling to indulge our own desires?

A baby bird isn't viable out of the nest. Are you OK with someone killing it because they want to?

Third, the question of viability is itself something of a red herring. A person in a coma, on a respirator, is not viable without it, but as long as there is hope of recovery the plug won't be pulled.

And a baby in the womb has an excellent prospect for 'recovery'. It's a nine-month process, and is successfully concluded thousands of times a day, all over the world.

Not fair to say that the dude on the respirator has a chance of becoming a functioning member of society in short order, while the baby won't be that for awhile...unless you're willing to pull the plug on those who would be left crippled for life. (Which also addresses the 'abortion of fetuses who would be born disabled, doesn't it?)

And those who need government assistance, in the form of Social Security disability...for which I am still waiting.

There are two life and death issues in this election. The Affordable Care Act, and abortion.

There are two likely candidates. Hillary Clinton has vowed to strengthen the Affordable Care Act, and support free access to abortions.

For a Christian, I believe the choice is clear, because these issues are the meat of the decision.

It's not about immigration or gun control or trade deals. Those are important, yes, but the vote you cast can and will impact life itself for thousand living today, and, as the cliche says, millions yet unborn.

It will set the agenda for the Supreme Court for perhaps a decade to come.

Yes, Trump can be obnoxious and downright mean. He can sound hateful and arrogant. But on these two vital points, his values are shared with the Christian community, and I am surprised...nay, shocked...that many Christians say 'they can't bring themselves to vote for the man'.

Because not voting for him is a vote for the other side. It's a vote for abortion, and placing a monetary value on life.

Dietrich Bonhoeffer said, "Not to act is to act."

NOT TO VOTE IS TO VOTE.

PS...the word this week is GROW.

Ladron my service Heeler
thinks like a wee Belfast peeler.
She's grown into the job
(and there are teeth in that gob!),
she'd drive the Pope to his kneeler!

Yes, Ladron...the pint-sized policeman. She is now pushing me away from the computer...bye... 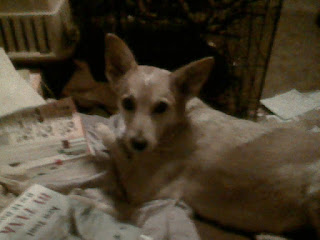