This week's word is DWELL.

Con Thien is hard by the Z. It's more like California than Viet Nam, and the sea fog can be chilly.

The name translates as The Place Where Angels Dwell.

I'll translate. Con Thien is a low rise in the terrain in the northern part of South Viet nam, very close to what was the demilitarized zone, the UN-mandated buffer between North and South that did nothing to ameliorate a long and tragic war.

The one-nine is the first battalion of the ninth Marine regiment, a unit that earned a reputation for getting into the heaviest contacts, and winning through with brutal casualties. Thus, The Walking Dead.

The TV show of the same name, about zombies...OFFENDS me. Those words are sacred.

What does this have to do with terminal illness? A lot, as it turns out.

With an abbreviated future, one turns to the past...not living in the past, that would be really stupid...but reintroducing the paradigms of that past into one's current reality.

In other words, personality growth slows, or stops.

The affable goof with a broad sense of humour is largely gone, replaced by what has been described to me as a grim Centurion with a cold, thin-lipped glare. Tacitus' Centurion, really (as described by C.S. Lewis).

All the more relentless because he had endured it himself.

The Walking Dead...still walking among the angels, after all these years.


And now, if I may, I'd like to introduce two new short ebooks.
The first is "Faith in the Night", which describes why, in the face of a life that has largely fallen apart, I still have faith, and still feel loved by God...and why I still want to live.

The second is a Christmas story, "Angela - A New Mexico Christmas". It's about a boy, his grandfather, and the cow that saves their lives in a blizzard...but she's part of a beef herd, and can the rescued become the rescuers?

If you'd like one or both, you can email me (tempusfugit02(at) gmail (dot) com) for a PDF, or click on the covers to go to the Amazon Kindle pages. They's both 99 cents. 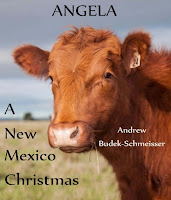 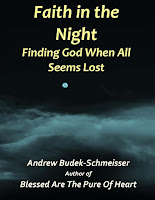