Five Minute Friday again, and again I am writing ahead. I will try to work in the keyword when it's revealed. Apologies, but it's just the way it is.

I have a confession...I almost violated Robert ("I'm just a dude playin' a dude disguised as another dude!) Downey Jr.'s Prime Directive... 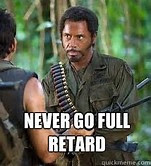 This post was originally written as  meditation on how I have come to understand the ethos of suicide under extreme conditions. It' was thoughtful and true and empathetic...and totally off the mark for this blog.

I wrote it when things were really bad, and I had been spending large part of my time in a foetal position, waiting for the pain to abate, just a little...or waiting for myself to get used to it.

Well, things were that bad, and as I write this are a bit worse, but the thing is...

I have control over my own mental ambience.

It's my choice to look into the abyss, or to raise my eyes unto the hills beyond, whence surely cometh the promised help.

It's human to grapple with despair...but we're supposed to rise above that. We're creatures of Light, caught halfway between dirt and divinity.

We are Mary's heirs, feeling the pain of the labour of God's Mom, birthing Heaven in the manger's mire. (There! The Word!)

We can grovel in the dirt, or raise our hands in hope.

Turn the beat around.

For anyone who's interested, I left the original post intact. It was originally called Suicidal. It follows below.

Yeah. Full retard. An exercise in navel-gazing, and perhaps instructive in what not to do when writing a blog post.

But hey, at least you get two musical selections!

Morphine or a bullet.

That is what things have come to here. I spend a lot of each day (as mentioned in my previous post) lying on the floor in a foetal position, waiting for the pain to abate enough to be able to rise again. And perhaps do something worthwhile.

In the past I decried those who chose to end their own lives, considering it a cowardly abnegation of God's gift of life.

I am eating those words. If I could stand removed from myself, and see what others see, I would hand over a cup of hemlock, without qualm. Enough, observed, is enough. Let it end, and God will, most assuredly, understand. Of this I have no doubts; not any more.

But not for me.

And you, dear Reader, are a part of it.

I promised to bear witness to life being worth living, to God's blessings outweighing pain, to the ultimate hope we witness with everyday kindness tipping the balance against hopelessness.

I promised to care for my wife until death do us part; I can't do much for her except making sure she has food to take to work, occasionally fixing dinner, and moving the refrigerator so she can do the needed repairs. The physical work wipes me out, but I am still far larger than she is, and there is some strength left.

I promised my dogs I would be there for them, to feed them and let them out and love and hold them when the memories of their past abuse, before they came to us, becomes too much to bear.

I am needed, and there is no easy exit.

I am a devout Christian, but I am also a Zen Buddhist, and in my Asian genes is an understanding of the Tokko boys of the Second World War, the Kamikaze.

For a full understanding, please read Mordecai Sheftall's stellar book, Blossoms In The Wind. But know this - these boys who never became men willingly gave their lives for a purpose. They didn't seek death for its own sake, or for vengeance. They were willing to die for those they loved. It was a pitiful misunderstanding of what an Allied victory would bring...but they accepted death with the knowledge they had at the time.

And they were not without humour - Sheftall relates the story of a group of tokko boys whose favourite (female) innkeeper had been jailed by the Imperial secret police, the Kempeitai, for selling liquor out of hours. So they invaded Kempeitai HQ, broke a few heads, and retrieved their beloved mamasan. What were the authorities going to do about it? order them to crash their aeroplanes into an American ship?

And so, I will follow them, in my way. I will work myself to unto death for my wife, and my dogs, and for you, dear Reader.

This is the reality. The dirt and the gavel and the pain and the splinters of the Via Dolorosa.

In the words of Robert Frost,

"I have promises to keep,
and miles to go before I sleep."

But this isn't all Teutonic Sturm Und Drang.  There's some fun to be had here. Jeff Lynne and the Electric Light orchestra have my back!

A bit of news..."Blessed Are The Pure Of Heart" has come home! Tate Publishing has gone south, and I regained the rights, so it'll soon be available in both Kindle hardcopy versions once again. In the meantime, if you absolutely can't wait (!), you can still get used copies from Amazon.