So Sorry, Please, So Sorry! 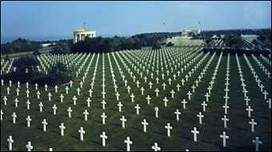 Somewhere in the last thirty years or so, it became something akin to a crime to hurt someone's feelings. Wish that had been the case when I was in grade school. I'd be rich.

The latest and greatest is that military personnel can be court-martialed if they talk to a comrade about their faith. The political appointees in the Department of Defense are working with a prominent atheist group to draft the guidelines.

Apparently, atheists get offended when someone mentions God. They feel left out, they can't work, and it affects how they feel about themselves.

This follows efforts to get all of the crosses in military cemeteries changed to non-religious symbols. That's a lot of crosses. But it will preserve the atheists' self-esteem, so we should have a warm feeling of doing good, when we do what they tell us to do.

Stars of David seem to be exempt.

And then there are those criminal Marines at Camp Pendleton, north of San Diego, who had the gangsterish notion of actually erecting crosses on a hill, as a memorial to fallen comrades.

I don't care if they feel marginalized.

It's time that we returned to the philosophy - that guided this country quite well for decades - that you can't please everyone, and you don't have to try. You want change, vote for it.