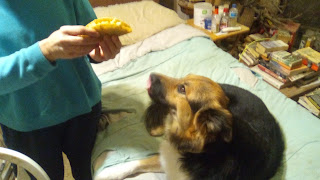 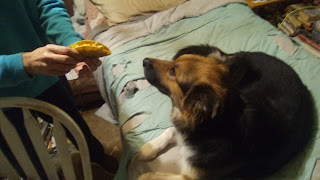 Belle does love a good taco;
in fact, she finds them great,
and since she is muy flaco,
she don't worry 'bout her weight.
But she thinks God had the dumbs
when He did not address
a dog's need for opposable thumbs
so's not to make a mess,
but that does not deter the beast
from chowing right on down,
and she will not in the least
wear a worried frown,
for she is, yeah, one smart pup,
keeps me around for cleaning up.
The Five Minute Friday prompt this week is RECEIVE. Oh, goody.
The taco that Belle has received
has stirred up envy in the pack,
and there's no way she can deceive
them of their quite obvious lack
of a tasty Latin treat
that is the grace of foodie graces,
so she just sat down to eat
it right before their doggy faces.
Not as dumb as it may seem,
for she is a wolf, you see,
and no canine would ever dream
of giving her the heartfelt glee
of making a food-stealing try,
for that's a nasty way to die.
A bit less than three minutes, there. Makes me feel like the Michael Jordan of sonnetry.
But it's not completely accurate. The Chihuahuas can steal her blind, and she just looks mildly on.
Barb found this video on Facebook. It's appropriate.
Sylvia would like some vanilla ice cream flavoured tacos, please.