This post might have been about another trip to the edge, an out-of-body experience, and hours of the shakes, from just this Monday.
Belle and the Chihuahuas and Red the Red Heeler brought me back with much yelling and rib-cracking CPR.
But it's been overtaken by events.
So let's talk about Henry instead, a deaf Pit Bull puppy (80 lbs at seven months) who really needed a home.
Now he's got one (in the picture below he's being welcomed by Belle The Service Wolf).
He's friendly beyond words, and just wants to be around us, and around his new canine family.
And he has a job. He's attuned to me, and knows that if I fall, he's to brace that strong back to help me up.
The Chihuahuas absolutely LOVE him. So does everyone else.
He deserves it. 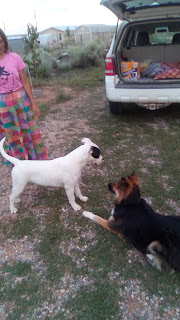 God has said we should take in
the at-our-doorstep waif,
and so I think this is a win
that Henry now is safe.
The world is not so very kind
to a Pit who cannot hear,
and so my wife was called to mind
what He made crystal clear
when told of Henry's dreadful plight,
refugee from a silent world,
and so she went to shine a light
that he could know, and led him toward
a gentle and forgiving place
where he could live his life in grace.
The Five Minute Friday prompt this week is SHOW, and here's a paean to the dogs that lately saved my life, incorporating the prompt.
I don't like to go to sleep,
night shows me what I'd fain not know,
for instead counting sheep
I may count flowers from below.
Belle, Red, and ChiChis do agree,
for yesterday I passed away,
and rather than in panic flee,
the dogs stepped up to win the day.
The Boys were screaming in my face
giving all, their very best,
while Belle The Wolf gave saving grace
with hard compressions on my chest,
so therefore I am back again
and enjoined thus to remain.
Just under four minutes.
If you are wondering what canine CPR looks like, I found a video.
Clearly I didn't see it from this angle, didn't see it at all, in fact, but could feel it through the mist. Belle The Service Wolf is not small.
Sylvia's willing to share her ice cream with him. Maybe.